It's been quite a while since I've shown a card on one of my blogs, my "regular" blog or this Art Abandonment blog.

I've been ever so busy this past month. I've had a lot of private evening appointments and have been away for courses at work for a couple of days as well, and have learnt so much new stuff that my head has been spinning when I came home trying to put my thoughts in their right boxes, so I've not had the time or energy to make a lot of cards, or to just colouring.

However, I did find time to finish this little girl from Wee Stamps, and she was - like my latest card - abandoned at the cemetary in Viborg, when I was there on Friday to put a wreath on my parents grave. I usually do this early November, when fresh flowers will no longer last long there. 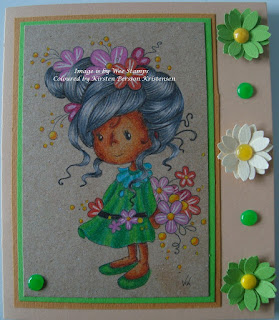 Having had an errand in the city, I didn't park on the usual parking lot, but on one at the other side of the cemetary. On the way to the grave I noticed a bench and on my way back to the car, I left her on it hoping that someone would find her quickly as the weather forecast was not exactly great. She is however in a plastic bag, so I hope she'll manage all right.

I hope you like her. She's coloured with my polychromos on kraft paper.

Please leave me a comment if you like my card, and if you want to see my cards/projects on a regular basis, please join my blog.

My two sisters and I celebrate our birthdays in the same week, and therefore I usually go to Viborg to the cemetary where our parents are buried to put a nice bouquet on their graves. I did so today as usual.

I have made it a habit to have a card that's ready for abandonement in my shoulderbag and while on the cemetary, I got the idea to put the card in the unisex restroom on top of the soap dispenser. So thought - so done! Hopefully, somebody that need a cheering up will find it.

I abandoned this card: 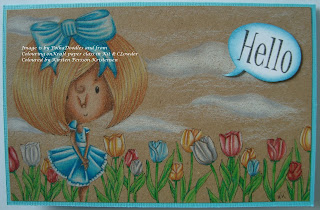 The card is from my "Colouring on Kraft Paper" class in Kit and Clowder and the image is "Missing you02" by PolkaDoodles. Very appropriate name (which I just saw now in my file) for abandonment at a cemetary.

I have added a Hello sentiment and distressed around it with blue distress ink matching her outfit.

She's coloured with my Polychromos pencils.

Today I went up to Loekken which is a city in North Jutland quite near the North Sea and about 1½ hours drive from my house.

My purpose of going there was to meet Karen, our newest member of the family and a real beauty.

On the way I thought I could spread a little love so I abandonnedd this card at a suitable place where I was certain it would be found rather quickly, and the possibility that it's a tourist who'll find it is big too.

Loekken is full of tourists during the summer months. I think the motive is quite suitable for this place close to the sea. 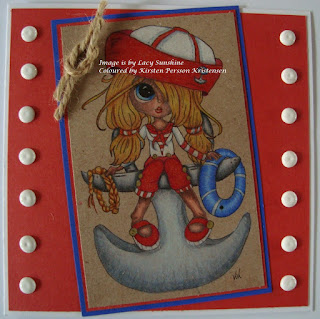 This is "Rory Anchors Aweigh" by Lacy Sunshine. I love Rory images, they are so cute.

To me this image implies colours of white, red and blue, so I've coloured her in those and also used backing papers in those colours.

Having been a girl scout in my childhood I know how to tie a reef knot and of course she should have one of those on the card. I've added melted HAMA pearls.  The white pearls don't melt evenly, so there's a little hole in the middle of them.

Please join my blog, if you would like to see my art abandonments on a regular basis.

Today I went shopping for a dinner party at my house later this week at a huge supermarket (in Denmark it is anyway) in Viborg called BILKA. They are celebrating a birthday, so there were some awesome discounts to hunt down.

I got 8 canvasses 18 x 24 cm and the only 2 left size 20 x 20. I would prefer to have had them all in that size, but the other 8 will do nicely. I also got 10 tubes of acryllic paint in 9 different colours (2 blue ones). And some leaf gold, which I'm kind of exited about, I hope my idea with this turn out great. None of this stuff is for the dinner party of course, it's for crafting LOL and maybe art abandonment.

Well, back to the abandonement.

I dropped the below card in a shopping cart a little way from the entrance, but as I left with my own cart, I saw a couple heading for the carts, so maybe they found it. It was raining cats and dogs, so I didn't wait to find out. As usual I put a note in the plastic cover on which the name of the digi shop is.

I've used the cutest image from KennyK called Bench Couple, I added a few die cuts (the fence and the grass). The butterfly is from a sheet of see thru stickers, I put it on some vellum and cut it out. I thought the backing paper was perfect for this image. 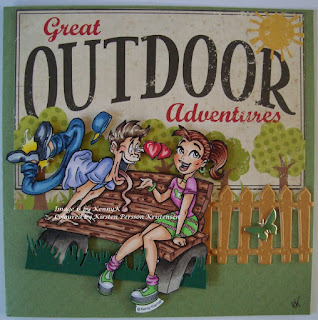 You can find it here:

I entered the card in the KennyK Facebook challenge #13 (last minute) this weekend and found out yesterday, that I'd won Top3 and thereby also won 3 new KennyK digis, Yeah!!!

Did you notice that on the right side of the blog under my photo, I've put a link to the blog with my coloured cards and likewise on that blog, so it's easy to switch between them.

Please join my blog, if you would like to see my art abandonments on a regular basis.

My first abandonments took place last week. The very first was on Monday - it seems much longer ago, but I wrote it in my calender, so it must be true.

I totally forgot in my intro to mention that I've contacted some of my favourite designers to ask them if I can use their images for this purpose. I'd rather obtain their permission that guessing that it's ok and then find out, that it might not be ok.

I'm so happy to say that while writing this, no less than 18 designers have kindly given their permission and one of them even donated an image. I'll not mention who, should they afterwards be swamped by requests to donate, but they know who they are, and how much I appreciate this.

I abandoned this cutie outside my physiotherapists on Monday 18th. It's Spring Bling Wryn by Tiddly inks, and she was also the very first class I followed in Kit and Clowder, so she has a special place in my heart. She being the first of many things, she's also my first image on kraft paper and my first project out of class with my Faber Castell Polychromos colouring pencils.
She was still there an hour later, when I left the physiotherpy back training class. 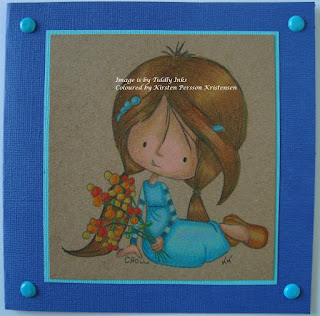 My second abandonment was Wednesday 27th - earlier this week and was two projects this time. I was going to Viborg (35 km away) to meet with some of my fellow students from economy class and have a long walk with them.

We were going to meet at the local park - Borgvold - and I arrived early, so I could take a walk in the park and find a nice spot to abandon one of my projects. I found a good spot on a park table not too far from the childrens playground, so I'm pretty sure that somebody would find it. I don't know if they did, as I had to leave shortly after the walk.

I abandoned this card in the park: 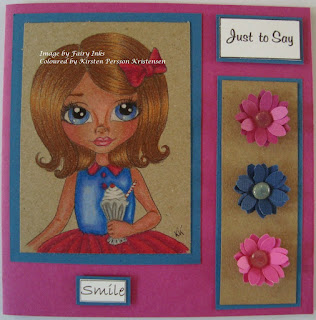 The last project in this second abandonment also has the Spring Bling Wryn on it. This time it's not a card but a notebook I put the image on, as well as a few flowers, to make it look a little more attractive. The image is coloured with my copics and is a left over image from class practice. I felt it's good enough to use and it fit the notebook perfectly.

The notebook was left in a shopping cart outside one of the supermarkets in Viborg. I went in to show a few items, and when I came out, she was gone. It was a matter of 10 minutes, but of course shopping carts are used all the time :-). 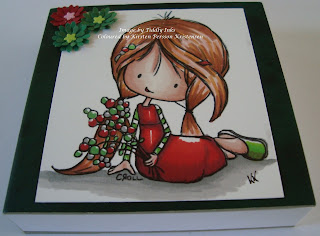 So now I'm up to date with my abandonments. I'll be back when I have abandoned again. I know I'll be doing it this week, so keep an eye out for this blog.

Please join this blog too https://kipekr-artabandonment.blogspot.dk/,  if you would like to see these projects on a regular basis. These projects will not be featured at kipekr.blogspot.dk.

I recently joined the Facebook group Art Abandonment which purpose is to spread the love of all kinds of art as random acts of kindness to people all over the world. The group is where we post photos and places of our (or some of our) art projects.

Projects like cards, coloured stones, small paintings, jewelry and much much more can be abandoned anywhere on the earth for people to find and keep for free. It's basically finders keepers, but if the project found is not to your taste, you can either give it to somebody else, or you can just leave it for somebody else to find and keep.

It's all done with the purpose of making somebody surprised and happy with their findings.

If you're lucky this person might respond to the note in the plastic bag and either contact the FB group with a photo/story about their findings, or perhaps send you an email directly if your email is on the note.

In the FB group files there are several examples of texts for notes. With the permission of a friend, I've adapted hers to myself and I also translated it to Danish. My note have both a Danish and an English version of the text, so if a tourist finds it, he/she will know what it's all about.

Having been making coloured cards like on kipekr.blogspot.dk  for what, 2 years by now (since Sept. 2014), I have quite a lot of cards in my posession, which I can easily part with. I really would love to send my cards to people on the RAK list in Kit and Clowder, but I cannot afford the huge postage which keeps rising, so I thought this was another great way to separate myself from some of my cards.

If you're interested in this, please go search the Art Abandonment group, join it and start abandonning your own projects.

I hope to spread some love with my cards.

Feel free to leave a message to let me know, if you like the cards.

Please join my blog, if you would like to see my projects on a regular basis.